2 10 5 1
I'm looking at what has been happening in other countries as well Canada in recent years and decades. Same lies being forced through legislation etc. while attempts made to silence and making criminals out of citizens for standing up against such lies forced through legislation and standing up for citizens and country. I see officials turning back on fact, turning back on citizens and democracy while instead catering to the dictatorship of lobbyists and the globalist crime organization in recent years. It's tyranny and treason against the citizens of any so called democratic country such as Canada. I see a sickness among officials and selfish interest groups of which they ignore fact while going along with factually exposed lies such as islamaphobe, homophobe, transaphpobe etc. while pathetically referring to such lies as their so called belief while again ignoring the facts that exposes the so called beliefs as false in the first place. I know that political parties are in on it thus to what end will they go to deceive citizens such as pre orchestrating the results of an election in attempt to silence and make criminals out of Canadians while they stock our country with invaders certainly wouldn't come as a surprise to top off everything else that goes on. It has crossed my mind that the political parties etc. could have been in on this from the beginning as in perhaps even before Bernier left the conservatives in attempt to try and quash Canadian hope. I do not trust our governing system for genuine reasons and nor do I trust them tallying votes etc. Are you that fool who would? You really think that the majority of Canadians want to deliberately kill our economy while impoverishing our populations with invaders and mass debt rapidly rising while paying carbon tax to burn the oil of those lobbying to prevent Canada from building pipelines etc. like Canadians are a bunch of gullible and stupid idiots?!! It doesn't add up, it goes along with the main stream medias fake narratives a little too well to not throw up red flags everywhere. They guy who has been abusing tax dollars to fund the media to hide news from the public while the media is also used to peddle lies etc. on the public as news is alleged to have won the election ... and you are so quick to believe such an outcome comes with even a shred of trust worthy credibility?!! Shame on you!

I suspect in all likelihood 10 - 20 million Canadian votes went into the garbage pail instead of being tallied. They quite obviously lie and deceive so much these days while going along with each other lies and deceptions from party to party, how could such possibly come as a surprise?! 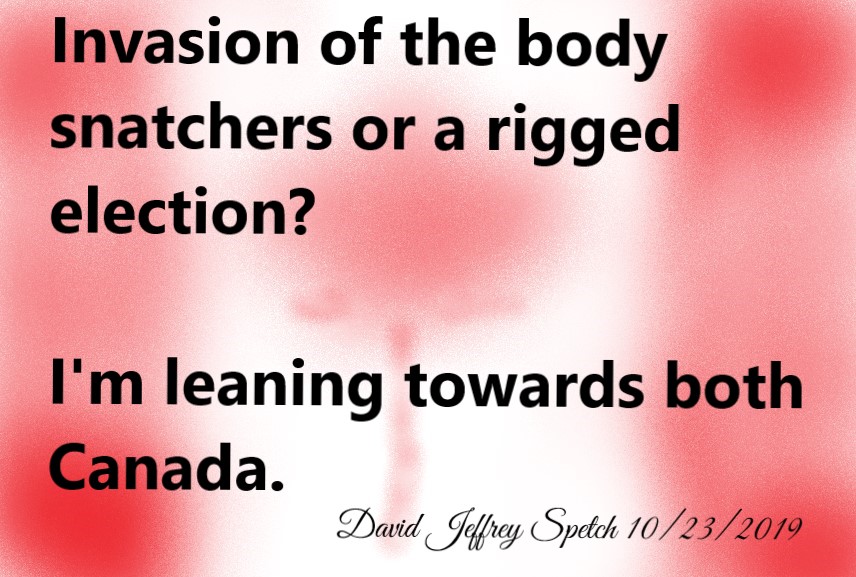