2 10 5 1
Canadians are being alienated illegally and otherwise while being made out to be criminals for being opposed to being alienated by this sudden rush of illegal and other invaders with liars creating legislation and forming so called policy while telling citizens such rubbish along the lines as citizens being alienated is what is offensive. It's called sabotage, it's called elected and appointed traitors and tyrants even forcing lies through legislation to make citizens out to be violent for not lying for the sick and extremely offensive, compulsive, obsessive lying LGBT selfish interest group. This is the insanity we are forced upon having with our political parties obviously with a monopoly on our political system. Our political parties loyalties are to the dictatorship of lobbyists and the globalist crime organization which is quite obviously not to the citizens of Canada and nor is their loyalty towards democracy quite obviously. Officials loyalties are to the party or they get kicked out, just ask MP Jody Wislon-Raybould or MP Jane Philpott. Parties can not be trusted yet how does an independent these days become Prime Minister hence the monopoly people, wake up. 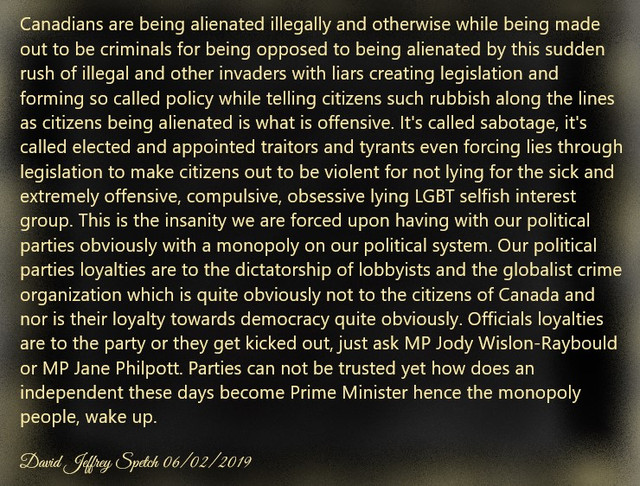