No countries majority ever voted sickos to pretend to be the opposite sex so they can go around robbing everyone else of what we are with a bunch of extremely offensive sick and filthy lies and deceptions for example. Oh and because the majority would never lie for such sick repulsive garbage, traitors and tyrants force lies through legislation attempting to dictate everyone should have degrade themselves by having to stoop to the extremely repulsive LGBT's sickly level thus lie for such sick, offensive and inexcusable garbage as the LGBT. They do not want to accept themselves for what they are so they are desperately scrambling to try and drag everyone else down to their sick, filthy and disgusting level thus out to make a complete mockery of society. They need to be reminded every day that thanks to heterosexual unions we all even exist thus the significance of being "born" with a penis having sex with those "born" a vagina aka the one and only "heterosexuality" (those who exclusively have sex with those born with the opposite sex genital that the individual them self is born with).

There is no such thing as a democracy where the globalist crime organizations agenda is being carried out but there is plenty of tyranny and treason going on thanks to sell outs apparently voted into office who eagerly turn their backs on citizens, turn their backs to democracy and instead cater to the dictatorship of diaper headed lobbyists along with the compulsive, obsessive, lying, deceiving, media corrupting and cowardly in the intellect department globalist crime organization. 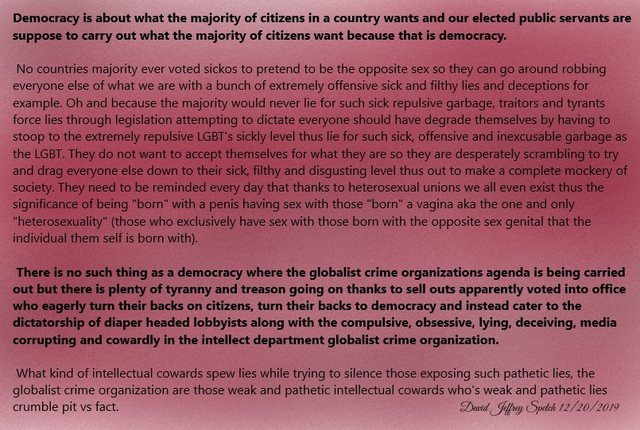