Welcome to our Community
Wanting to join the rest of our members? Feel free to sign up today.
Sign up
O

1
On the occasion of the 75th anniversary of the end of the Second World War, the Muenster Museum prepared an online exhibition: films showing the city after the end of the war. How did citizens survive in the city, the Americans bombed? How did they cope with the difficulties among the extensive amount of debris and rubble? 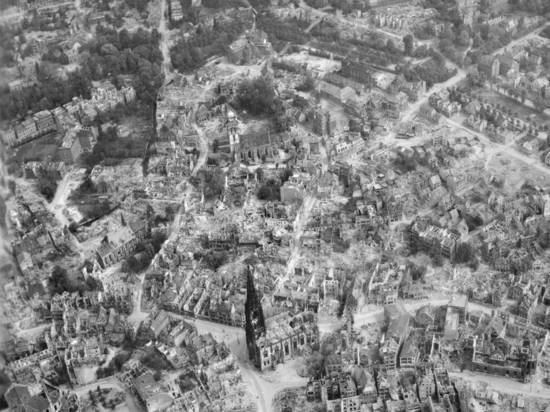 «Muenster 1945» is an online exhibition, dedicated to the 75th anniversary of the end of the Second World War. The city museum truthfully and without embellishment told about the life of the civilian population, showing the poverty of those, who were driven into slavery; also about the beginning of the British occupation. With the support of the Imperial War Museums in London, the organizers produced two films that show unknown moments of the capture of Muenster in early April 1945. Subtitles help you understand and navigate those dramatic events.

Detailed pictures of the city, taken from an aerial perspective, show the scale of the war disaster caused to Muenster. The photos were taken in May 1945 by the American "392nd Bomber Group", which was not actively involved in military action. The purpose of the mission was to transmit to the military, who did not take an active part in the hostilities, information about the scale of the air war against Germany.

So there were rare aerial photos of Muenster taken by Harvey Devoe on May 12, 1945 during a flight from England through Muenster, Osnabruck, Bremen and Hamburg with a special camera attached to the bow section of a bomber aircraft. Along with photos from the aerial perspective of the air at Prinzipalmarkt and the Lamberti Church, these are the very first photography of Muenster right after the end of the Second World War.

The online exhibition also includes scans of documents of the former military government, as well as photos of the rebuilt postwar Muenster. You can visit the exhibition online on the museum’s blog (blog.stadtmuseum-muenster.de).
You must log in or register to reply here.
Share:
Facebook Twitter Reddit Pinterest Tumblr WhatsApp Email Link
Top Bottom