Keep This Sick LGBT Hate Group Away From Our Children! 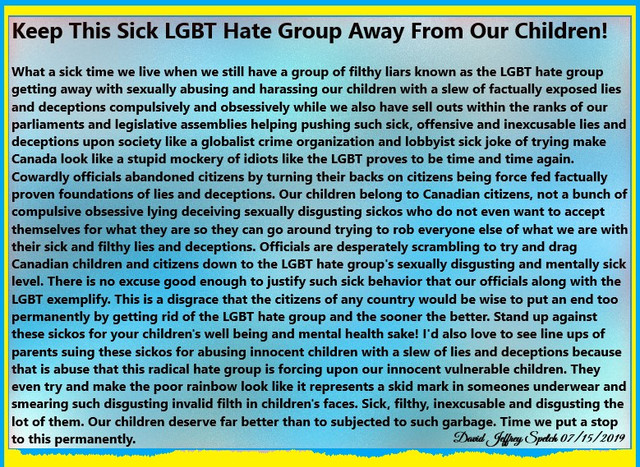 What a sick time we live when we still have a group of filthy liars known as the LGBT hate group getting away with sexually abusing and harassing our children with a slew of factually exposed lies and deceptions compulsively and obsessively while we also have sell outs within the ranks of our parliaments and legislative assemblies helping pushing such sick, offensive and inexcusable lies and deceptions upon society like a globalist crime organization and lobbyist sick joke of trying make Canada look like a stupid mockery of idiots like the LGBT proves to be time and time again. Cowardly officials abandoned citizens by turning their backs on citizens being force fed factually proven foundations of lies and deceptions. Our children belong to Canadian citizens, not a bunch of compulsive obsessive lying deceiving sexually disgusting sickos who do not even want to accept themselves for what they are so they can go around trying to rob everyone else of what we are with their sick and filthy lies and deceptions. Officials are desperately scrambling to try and drag Canadian children and citizens down to the LGBT hate group's sexually disgusting and mentally sick level. There is no excuse good enough to justify such sick behavior that our officials along with the LGBT exemplify. This is a disgrace that the citizens of any country would be wise to put an end too permanently by getting rid of the LGBT hate group and the sooner the better. Stand up against these sickos for your children's well being and mental health sake! I'd also love to see line ups of parents suing these sickos for abusing innocent children with a slew of lies and deceptions because that is abuse that this radical hate group is forcing upon our innocent vulnerable children. They even try and make the poor rainbow look like it represents a skid mark in someones underwear and smearing such disgusting invalid filth in children's faces. Sick, filthy, inexcusable and disgusting the lot of them. Our children deserve far better than to subjected to such garbage. Time we put a stop to this permanently.