2 10 5 1
Simply go around stabbing Canadians while claiming being muslim is a mental illness.

Our sicko government is welcoming people known to be violent into our country and justifying such sick behavior by slandering Canadians with such lies as islamaphobe and offering rewards to those who ***physically knife Canadians while claiming being muslim is a mental illness*** with a free college education while also allowing them to be free out in society to knife other Canadians with rewards of being offered opportunities to stab more Canadians for more college diplomas. Let your anger be your guide, they call you opposing their such obvious support for violent hate crimes against Canadian citizens and being rewarded for it, hate speech, racism, islamaphobe and they make up such pathetic inexcusable lies because not one of them has so much as a shred of validity when it comes to the foundation of the issue as they themselves so eagerly demonstrate time and time again and again. To a sick mind it is not them committing violent hate crimes against Canadian citizens that is hate, it's speaking against the violence they call hate because all these sickos rely upon are lies to continue to physically abuse Canadian citizens while attempting to force oppression. The only ones who deserve to suffer such violence "if anyone" are quite obviously the families of these sicko officials welcoming it into Canada. I do no advocate violence I bet they would stop welcoming such an obvious threat to Canadian citizens if Canadians applied the same violence to officials and their families that muslims are pulling on Canadians until they stop bringing them in and start deporting by the hordes. They all belong in prison and Canadians citizens deserve far better than this trash!

Our hateful government tries to hide this from the main stream media. 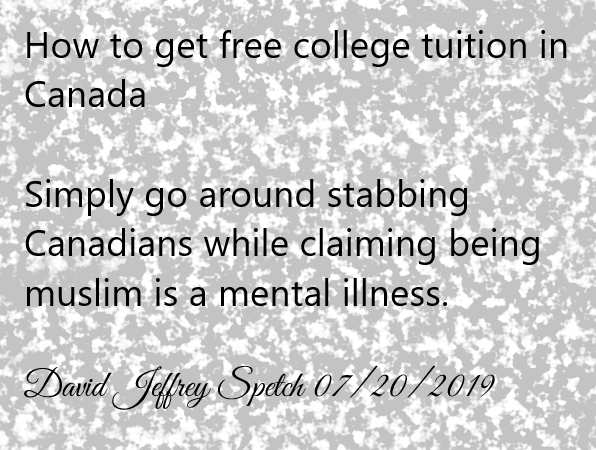