OK, Let's see CPC Peter McKay or Erin O'toole give one valid reason, even just one!

2 10 5 1
Give one valid reason that there is to be proud of a man humping a man or a woman humping a woman? Giving no answer clearly reveals they knowingly support lies while cowering from fact and are seeking to lead yet another sick liberal party running under the guise of conservative. A couple of phonies want to march in an radical and extremely offensive and invalid freak show.

Erin O’Toole warns that Peter McKay would turn Conservatives into ‘Liberal party lite’ meanwhile O'toole will sell us out to compulsive obsessive lying deceiving left wing radical bigots as well as you may see for yourself in the video. 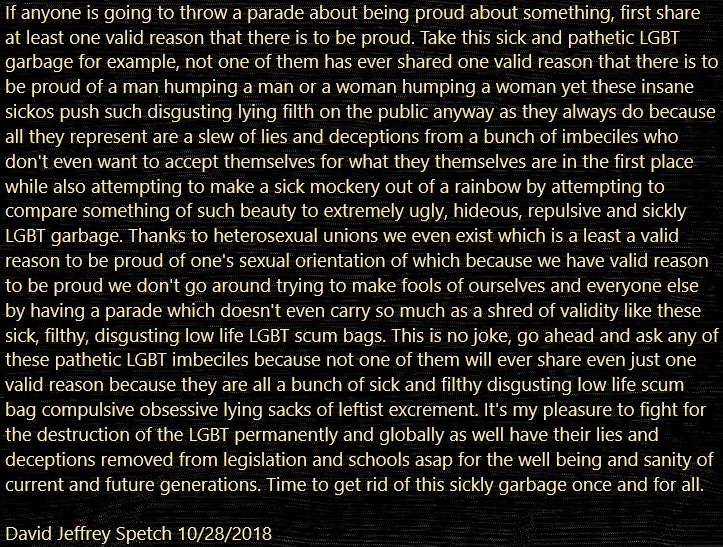 2 5 1
That LOATHSOME WEASEL Pierre Trudope said ONE USEFUL THING during his entire life!

He stated that the "govt has no business in the bedrooms of the nation"!

That is THE ONE THING Trudope said that I CAN SUPPORT! As long as activity is consensual, and does not spread diseases - meaning Aids or STD`s and as long as the players ARE personally PAYING for any pregnancy that results - why then should we care much regarding who is doing what to whom?

What we do IN PRIVATE is NOT govt biz! Having said that - a good many of those marching in Pride Parades should be told to COVER UP MORE! City of Toronto Political Imbeciles have even gone so far as to warn the public that a typical Toronto Pride Parade IS NOT FOR KIDS! Thus Gays FORCE their views and values on others!

Any behaviour IN PUBLIC should be G RATED! But hat you do in your bedroom is YOUR BIZ!

LIE-berals wanted to confuse us with FAKE NEWS about things like the infamous Bath House Raids! And oh yes - homosexual activity was criminal back then - but the Bath Houses were raided mainly because Gays were engaging in SEX ACTS in PUBLIC PLACES!

And in fact such public activity is still going on - as occasional arrests are routinely made at our PUBLIC PARKS and at our public washrooms!

Do we not have MUCH BIGGER fish to fry here? Such as our national bankruptcy!

Such as damaging influences POISONING our electoral process by issuing voter registration cards to people who ARE NOT ENTITLED TO VOTE!

Such as civil service union HOG GREED for gravy that is pitting HOGS against the rest of the country!

And what of organized crime in Canada? After all we are now known as the money laundering capitol of the world!