(keep in mind: If lying is so acceptable then why do we even have court houses?!!) 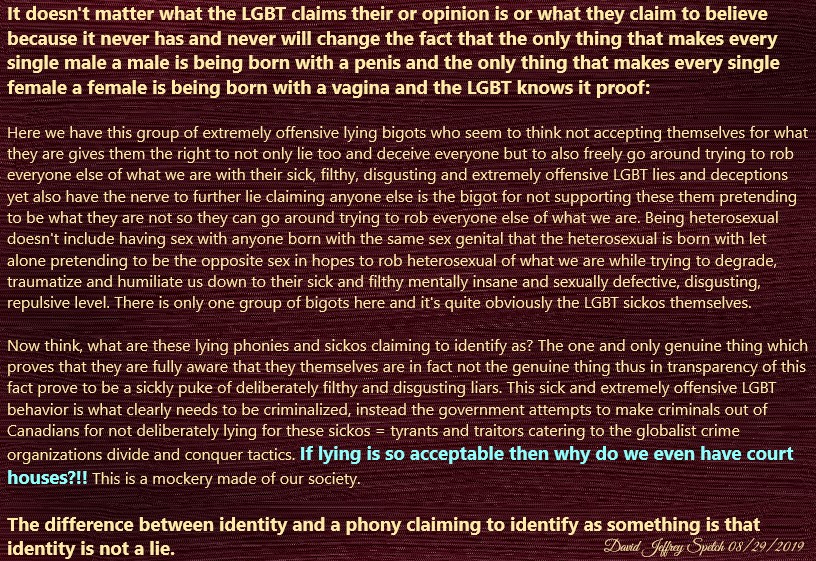 Here we have this group of extremely offensive lying bigots who seem to think not accepting themselves for what they are gives them the right to not only lie too and deceive everyone but to also freely go around trying to rob everyone else of what we are with their sick, filthy, disgusting and extremely offensive LGBT lies and deceptions yet also have the nerve to further lie claiming anyone else is the bigot for not supporting these them pretending to be what they are not so they can go around trying to rob everyone else of what we are. Being heterosexual doesn't include having sex with anyone born with the same sex genital that the heterosexual is born with let alone pretending to be the opposite sex in hopes to rob heterosexual of what we are while trying to degrade, traumatize and humiliate us down to their sick and filthy mentally insane and sexually defective, disgusting, repulsive level. There is only one group of bigots here and it's quite obviously the LGBT sickos themselves.

Now think, what are these lying phonies and sickos claiming to identify as? The one and only genuine thing which proves that they are fully aware that they themselves are in fact not the genuine thing thus in transparency of this fact prove to be a sickly puke of deliberately filthy and disgusting liars. This sick and extremely offensive LGBT behavior is what clearly needs to be criminalized, instead the government attempts to make criminals out of Canadians for not deliberately lying for these sickos = tyrants and traitors catering to the globalist crime organizations divide and conquer tactics. If lying is so acceptable then why do we even have court houses?!! This is a mockery made of our society.

The difference between identity and a phony claiming to identify as something is that identity is not a lie.