2 10 5 1
Here is the wonderful transcript I read from. Oh yeah it is rough with it's typos etc. but I just plowed right through it, added in that special something here and there and translated mis referenced words etc. with the greatest of ease. This is a blow you away video with my 100 percent satisfaction for having created one of the best quality content filled videos of modern day.

My pleasure to bring this to your attention for the well being and sanity of current and future generations.

Here is a beautiful excerpt from the video: 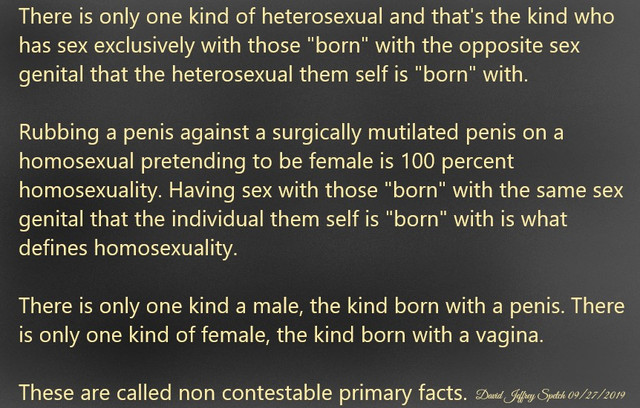 This pathetic "cis" lie is pushed by the kind of LGBT homosexuals who do not want to accept themselves for what they are born thus are for life no matter how sick LGBT minds continue to prove to be while quite obviously seeking to abuse heterosexuals like bunch of stupid guinea pigs by ignoring fact, such as the the fact that only thing that qualifies any heterosexual, a heterosexual is that we have sex with exclusively those born with the opposite sex genital that we ourselves are born with which factually doesn't include having sex with some sick homosexual born with the same sex genital that the heterosexual is born with pretending to be the opposite sex that they are born and will always be so these sick kinds of homosexuals can try and rob us of what we are while even forcing lies through legislation in attempt to try and force everyone else to lie for these sickos thus are stupid enough to be thinking everyone else is suppose to be eagerly stupid enough as they are to stoop to assist these sick and filthy bigots with robbing heterosexuals of what we are with their sick, filthy and disgusting LGBT lies and deceptions. Such behavior is unacceptable, inexcusable and unforgivable!

"There is only one kind of heterosexual and that's the kind who has sex exclusively with those "born" with the opposite sex genital that the heterosexual them self is "born" with.

Rubbing a penis against a surgically mutilated penis on a homosexual pretending to be female is 100 percent homosexuality. Having sex with those "born" with the same sex genital that the individual them self is "born" with is what defines homosexuality.

2 10 5 1
How could anyone possibly not think that your Parliament, Congress, Legislative assembly etc. is a sick joke of a circus let alone a tyrannical and treasonous tirade when they attempt to dictate citizens should ever have to stoop to lie for anyone?!!

The LGBT are trying to make criminals out of you for not assisting these homosexuals with robbing you of what you are. The government is trying to punish you for not lying for these compulsive obsessive lying deceiving homosexuals. This is way over the line of unacceptable. Even if you are a homosexual male, (the kind of homosexual male that accepts himself for what sex / gender he always will be since birth) according to LGBT garbage, you having sex with a vagina ripped out of some woman's body is what makes you a homosexual! That's right, like Paul Joseph Watson use to say "let that sink in" these sickos are insane!!!

A person who has sex with those born with the same sex genital that the homosexual them self is born with is homosexuality. They use this sick and filthy absurd lie to degrade, humiliate and traumatize heterosexuals while LGBT sick and filthy bigots use every sick and filthy lie and deception to go around trying to rob every one else of what we are and all because these sick homosexuals do not even want to accept themselves for what they are while expecting to go around robbing everyone else of what we are clearly reveals who the only bigots to do with this issue are and it's my pleasure to work towards putting an end to this sick, filthy and disgusting behavior that the LGBT represents permanently and globally for the well being and sanity of current and future generations.

You want polite, go to a political official for polite, they talk polite alright while they stab citizens in the back with a slew of lies and deceptions on a daily basis such as with these sick and filthy LGBT lies and deceptions forced through legislation and while they sell out their citizens they act like talking polite is what is important as if to say being impolite to them while they back stab you is what is inappropriate as they obviously continue to get away with stabbing citizens in the back with such rubbish. In this day and age unless it is deserved through something called respect, you can take being polite and stick it where the sun don't shine even if your brain really is way to small to understand what I mean by that all by yourself.

Sure you LGBT are human, I too am human and you want to make up a bunch of sick and filthy lies to assist homosexuals with humiliating, traumatizing, degrading me / heterosexuals with such sick behavior that the LGBT represents doesn't deserve so much as a shred of respect, it deserves the garbage pail and such sick behavior that the LGBT represents criminalized permanently and globally for the well being and sanity of current and future generations. Sick and filthy liars and conspirators claiming to acknowledge a lie to replace factual definition with such rubbish as phony excuse for justification for trying to force such rubbish on everyone else certainly doesn't give their lies even so much as a shred of validity, it just reveals not mere theory but factual conspiracy by intellectual cowards unfolding and who's transparency is exposed simultaneously in several countries around the world in modern day as well while they try and block and ban everyone exposing their sick and filthy rubbish for well over a decade in North America that I have noticed first hand on hundreds of occasions. The lies these sickos attempt are infuriating, lies on top of lies on top of lies all falling apart like a house of cards before your very eyes right here, right now!

I will say Mexico boasting six hundred thousand marching against transgarbage recently was nice to see, but next time let's make it billions globally to make clear such sick behavior that the LGBT represents is inexcusable and unacceptable anywhere globally thus put a swift end to this sickly LGBT hatred for heterosexuality with their puke of insanity manifestations of lies and deceptions on the foundation of their every issue I have addressed and intellectually slaughtered with the greatest of ease over the years.

It's my pleasure to fight to assure such sick behavior is criminalized permanently and globally and I will fight on relentlessly until success and no less. The difference between identity and claiming to identify as something is that identity is not a lie.

It would have saved the world billions and many years headaches and psychological trauma over such sick inexcusable behavior if when homosexuality was legalized, discrimination against heterosexuality was criminalized. Instead of helping them accept themselves for what sex they are born thus will always be, the government wants to assist them robbing everyone else of what we are with the nerve to claim you the hater and any kind of bigot for being infuriated and disgusted with their sick behavior in using lies and deceptions to rob others of the right to be what we are. The sooner that the LGBT hits the garbage pail permanently and globally the better and quite obviously for the well being and sanity of current and future generations! These sickos who have the intellectual equivalence of a skid mark in someones underwear are trying to enslave everyone with lies while calling you the hater for being disgusted with such sick behavior that the LGBT exemplifies let alone trying to force citizens to lie for these sickos to help them get away with such sick, inexcusable unforgivable behavior courtesy of tyrants and traitors turning backs on citizens and democracy while instead catering to the dictatorship of lobbyist and the globalist crime organization. Imagine the planet finally being free from such sick and filthy garbage being forced upon everyone let alone compulsively and obsessively. It's only a matter of time so you go right on ahead and keep thinking about that. 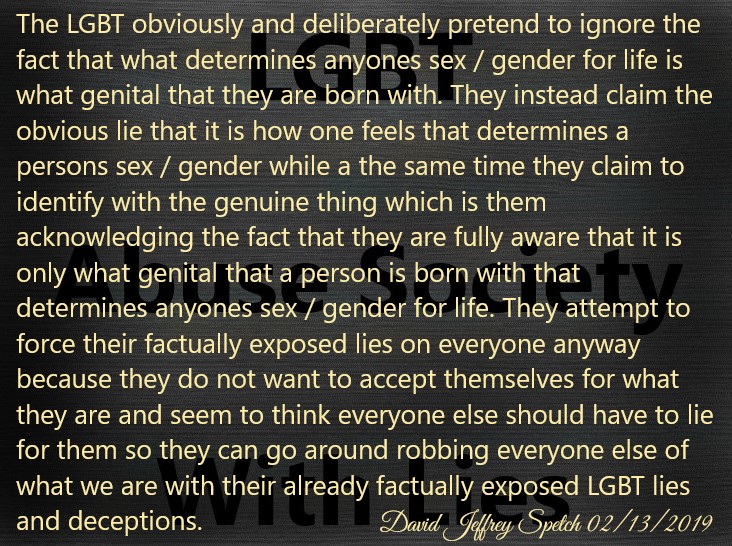