At least I had the satisfaction of deleting my own Youtube channel thus they can no longer do that or use my account to try and conform me to their sick and filthy globalist agenda by threatening to give me strikes while deleting my videos and Youtube using lies as so called justification for deleting my videos of which such videos I create I share facts exposing lies and deceptions on the foundations of primary issues I address after years of Youtube doing what has appeared to be their very best to keep me hidden from the public. All of those years of history removed from Youtube. My pleasure and my sacrifice to release myself from such abuse.

Youtube tells me that me exposing lies which lead to war and divide is what hate is or inciting violence is and not the liars I expose inciting hate and violence that I work towards putting an end too for the well being and sanity of current and future generations globally. Pretty sick and twisted minds running Youtube indeed.

Here is a copy of the video youtube lied about and deleted:

Are you still Youtubes little play and abuse thing? I don't appreciate being lied about or stringing myself along for Youtube to abuse. Do you?

...Still on Bitchute video uploading site as well as 153news. 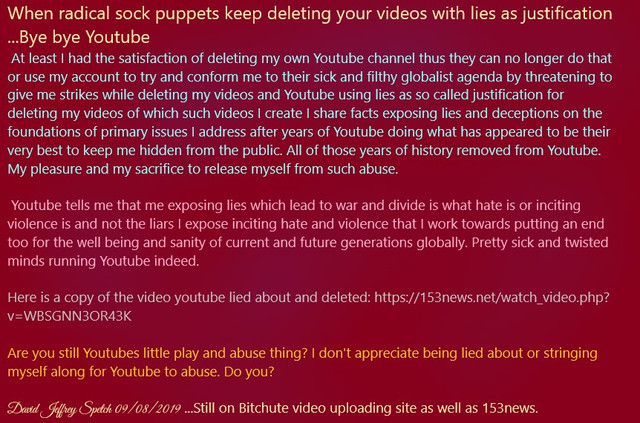