2 10 5 1
Who else but an extremely stupid and filthy racist piece of excrement would have any problem with people claiming it's ok to be white?! Lying sacks of garbage are even stupid enough to be claiming that claiming it's ok to be white endangers the lives of their children yet they eagerly invaded the country even bringing their children knowing it was full of white people and if they genuinely felt that being white wasn't ok they obviously wouldn't have come, the lying sacks of excrement. Of course such rubbish only pops up now in Scotland recently after a bunch of obviously non white racist bigots have invaded the UK. Hey, such redundant and absurd rhetoric wasn't circulating before the invasion. Sickening how officials betray citizens like they have a gun to their head with a load of dictation in their ear to incite them to ignore fact and roll with lies and using such lies to try and make criminals out of citizens for the most absurd and invalid of reasons quite obviously, they deserve prison. This is the age of governing retards. 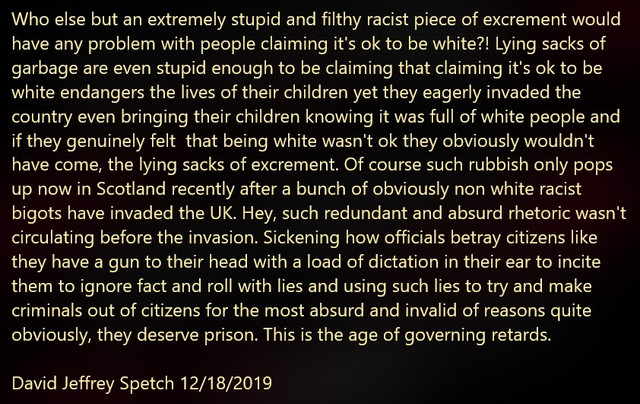